Gains and Losses in our LGBTQ+ Community

Reflecting Back and Looking Ahead

The New Year is a time for reflection and renewal. For the LGBTQ community, the New Year can be a time to remember the past year’s accomplishments and losses for queer and trans people.

There is no denying that 2022 was a difficult year for the LGBTQ community. From the Club Q mass shooting that left 5 dead, 19 injured, and an entire community grieving and destabilized, to armed far right Proud Boy protesters shutting down drag queen story times, our right to gather and express ourselves freely is being threatened by violence, intimidation, and hate.

But things are not all bad for the LGBTQ community. We are continuing to live and thrive as our authentic selves despite the hostility in the world.

In hopeful news, the House and the Senate just passed the Respect for Marriage Act, protecting same-sex and interracial marriages. Reception from the LGBTQ community has been mixed: on the one hand, the law passed and will protect same-sex marriages if the Supreme Court overturns Obergefell v. Hodges. On the other hand, it does not require states to legalize same-sex marriage, only to recognize legal marriages from other states.

Brittney Griner, a WNBA basketball star and Black lesbian, was just released from a Russian penal colony where she was held for ten months for possession of a vape containing hashish oil. She was returned to the U.S. during a prisoner exchange negotiated by the Biden administration.

This year, the “X” gender marker (an alternative to “F” and “M”) became available on U.S. passports. The Social Security Administration also no longer requires a doctor’s note to confirm a change of gender.

A new California bill will protect trans kids and their families fleeing states like Texas, Florida, Alabama, and Idaho which are criminalizing gender affirming healthcare for trans youth. SB 107 in California, proposed by Scott Wiener, will go into effect on January 1, 2023.

So what can we expect next year? We can only expect to see the progress that we fight for. The successes that we see in our public sphere and private lives must be celebrated as we continue to work toward justice and equality.

What are you doing next year for queer and trans kids? Some ways to give back are to donate to organizations like Equality Texas, Equality Florida, Trans Lifeline, Sylvia Rivera Law Project, and the Marsha P. Johnson Institute. You can also give a gift to a transgender youth this holiday season through Trans Santa. Consider joining your school board and advocating for LGBTQ students in your school district. Looking for more resources to support your child or trans youth in general? Check out transyouthequality.org/for-parents.

Next year, we can expect to see queer and trans resilience, excellence, love, and joy. We’re here, we’re queer, and it’s a new year. 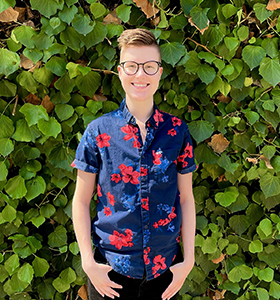 Leo Kirkham (they/them) has worked with LGBTQIA+ youth and young adults for 8 years as a youth advocate, camp counselor, and volunteer. They also have experience working with homeless youth, foster youth, and neurodivergent youth. Leo also volunteers as a mentor to community college students who are transferring to university. They are passionate about supporting vulnerable young people and giving them the skills to grow and thrive.

Email
Embracing Chosen Family During the Holidays and All Year Round